Prince Lestat: A Review of Anne Rice’s Return to Her Vampire Roots

I was absolutely delighted when I heard that Anne Rice would be publishing a new book in her vampire series. I admit I was greatly disappointed by the Christ the Lord and Songs of the Seraphim books, but The Wolf Gift and its sequel gave me new hope, so what could be better than a new vampire novel? 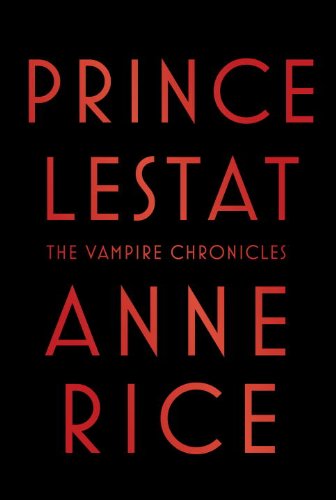 And when I read the description of Prince Lestat, it sounded even better than all the more recent books in The Vampire Chronicles, because let’s face it, the series went downhill after Queen of the Damned, but Rice decided in this new book to go back to the themes in Queen of the Damned and expand upon them. Anyone who read Queen of the Damned will remember Akasha, who called herself The Queen of Heaven and really was the first vampire. She went on a rampage in that novel to kill all the other vampires until the vampires all had a showdown, resulting in Akasha’s death and the demon inside her, named Amel, being transported into the vampire Mekare. Now in Prince Lestat, it is time for that demon to awaken after years of lying dormant inside Mekare.

Let me state here that I am going to give away some of the plot, so you may not want to read further if you haven’t yet read the novel.

The novel begins with Lestat hearing the Voice, a mysterious voice in his head that he soon learns is being heard by many other vampires. At first, no one is sure who or what this voice is, but in time, it becomes apparent it is the voice of Amel, the being trapped inside Mekare and previously inside Akasha, who is responsible for the Dark Gift and creation of the vampires. Amel now says he is miserable and cannot experience the world well from being trapped inside Mekare. He is seeking for a new vampire to live inside.

Before that issue is resolved, a few other surprises occur in the novel. Lestat meets Fareed, a doctor turned vampire, who is doing tests on vampires. Among those tests is trying to determine just what the differences are that make vampires and also whether they can breed—Rice’s vampires are almost all homosexual, but Lestat ends up fathering a child with a mortal woman here. Not until later does he learn, however, that he now has a human son named Viktor. We also learn about the origins of the Talamasca, the secret society that studies supernatural beings and has been featured in several of the novels, both The Vampire Chronicles and The Mayfair Witches series.

The novel moves along well through the first part of roughly seventy-five pages, but the second part, which continues past the three-hundred page mark, quickly starts to bog down the book. We are shown one vampire after another being contacted by the Voice. The Voice tries to play mind games with the vampires, seeking one of them to free him from Mekare. Finally, one vampire, Rhosh, succumbs to his desires and goes to the compound where Mekare and her sister Maharet and their companion Khayman live. Rhosh kills Maharet and Khayman, but he is so horrified by what he has done that Mekare gets away from him.

In the end, the other vampires confront Rhosh. However, even though he is basically defeated, they realize the Voice will rise again and seek to influence someone else. Lestat finally agrees to take the spirit of Amel into him and Mekare agrees to his doing so. Some reviewers at Amazon have said the ending is weird, and it is since Lestat basically has to remove Mekare’s eye and suck out Amel, as if eating her brain. But weird or not, I’m sure Rice knows it goes back to ancient rituals and beliefs that eating someone else’s heart or brain allows you to gain that person’s courage or wisdom. I’m sure it’s intended then to be symbolic in a way.

What also is interesting is that when Lestat consumes Amel, he basically becomes the protector of the life force of all the vampires. For that reason, he is named Prince Lestat. By now, the vampires have all come together, realizing they must work together to protect themselves, and so a sort of vampire government is formed—a type of benevolent elected monarchy with Lestat as the leader. I suspect this move in the novel is a sign that this book will definitely be the last vampire novel because it brings us full circle to answer the very questions Louis first asked in Interview with the Vampire when he became a vampire—not only as to the origins of vampires, but whether there are other vampires—now there are no more questions. All the vampires know one another and are organized. I suspect it’s equally intentional that the novel ends depicting Louis thinking about Lestat as his beloved prince whom he will soon be with—also ending the feud that began between them in Interview with the Vampire—and although they have gotten along better since then, now it’s as if their relationship is complete and resolved.

Is Prince Lestat Rice’s best novel? No, it is a bit too marked by her flowery, lush style that at times enchants but also allows her to go on and on at times with the characters repeating themselves or in this case each other since we are given far more points of view from different vampires than we need—in fact, this novel could easily have been a third if not half as long as its 451 pages. It also is lacking in action, although there are two or three stunning moments of action at key moments, such as when Rhosh kills Maharet and Khayman. I would rank it after the first three novels in the series and maybe also after Blood and Gold, but at least, it feels like a more complete end to the series than Blood Canticle was.

Whatever this book’s faults, I enjoyed visiting with my old vampire “friends” again, and I am glad Rice continues to write. I most appreciate her for how she writes within a Gothic tradition. She always does her homework and her novels are filled with references that make it clear she knows her vampire, werewolf, and supernatural novel history, unlike Stephenie Myers who, I believe falsely, claims she knew nothing about vampires before writing the Twilight series. For that reason, I kind of hope Rice writes more werewolf novels—I think it’s time to let the vampires rest.

Tyler Tichelaar, Ph.D., is the author of King Arthur’s Children: A Study in Fiction and Tradition, The Gothic Wanderer: From Transgression to Redemption, and The Children of Arthur novel series. Visit Tyler at www.ChildrenofArthur.com and www.GothicWanderer.com

Tagged as Akasha, Anne Rice, Interview with the Vampire, Prince Lestat, Queen of the Damned, Stephenie Myers, The Vampyre, The Wolf Gift