I only recently discovered French author Paul Feval (1816-1887) thanks to a reader of my blog. I was thrilled to discover him because he was a contemporary of William Harrison Ainsworth and George W.M. Reynolds, and I wondered to what extent he might have influenced British Gothic literature and especially Bram Stoker’s Dracula, if Stoker was a reader of French. Feval wrote three vampire novels that pre-date Stoker, and I plan to read them in the near future, but I decided to introduce myself to Feval by first reading his novel The Wandering Jew’s Daughter since I’ve always been interested in the Wandering Jew as a Gothic Wanderer figure and because I believe the Wandering Jew actually was a precursor and influence on vampire depictions in the Gothic tradition. 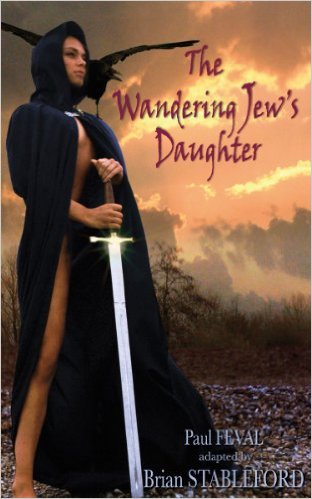 All that said, I was quite disappointed by this novel for several reasons, not the least of which was that Feval did not want to take his subject seriously. I also fault the publisher, Black Coat Press, for false representation of what the novel is about. This edition’s cover art makes it look like we will have a strong female character, and it is also selling sex and swordplay action. There is really none of either, at least not by a woman, in the novel, so shame on the publisher for false advertising. The back cover does not help matters, describing the novel by saying “Throughout the ages, immortals have battled fiercely, until the daughter of one of them falls in love with a young French nobleman.” The accompanying quote from Brian Stableford, the translator, also says that the novel “anticipates later developments in popular fiction, featuring an invulnerable but flawed hero who stops bullets and blades with his body and gives succor to the wounded.” While both of these statements are accurate, by mixing them with the cover art, I was expecting some fabulous tale of immortals battling to protect the human race, akin to the Highlander films. In a sense, the novel may be the great-grandfather of those films and character types, but I think most readers of popular modern fantasy would find this novel almost unreadable. Even the battle between immortals that ensues is disappointing and more a mockery than what we would expect from a good adventure novel.

That said, I have no issue with the translation by Stableford, since my French is rusty anyway, and I think Stableford provides an excellent introduction, afterword, and helpful end notes that are more interesting than the novel itself and make the book well worth the $20.95 price.

But what of the actual story? It is a hodgepodge of confusion. The novel opens with a young boy, Vicomte Paul, and his parents; with them lives Lotte, the Wandering Jew’s daughter, although how she came to live with them is never explained, and it is only surmised that she is the Wandering Jew’s daughter because the little girl does not seem to age. When Paul’s house catches fire, he is rescued but the girl disappears and his father suddenly changes in his demeanor.

I will not go into all the details, but as the novel progresses, we learn there is more than one Wandering Jew. There is Ahasuerus, the father of Lotte, who is the most like the traditional Wandering Jew, but there is also a whole household of immortals living in Paris at the House of Jews. Ironically, most of these immortal Wandering Jews are not even Jewish. They include a slew of biblical characters, including Holofernes, Lot’s daughters, Barabbas’ niece, the brothers Korah, Dathan, and Abiram, Madam Potiphar, Caiphas’ valet, the Pharisee Nathan who let merchants into the Temple, and Ozer, the Roman soldier who gave Christ a sponge to drink from during the Crucifixion. All of these people have been cursed into extended lives in some way and some have various other gifts or supernatural powers. None of them are developed other than Ozer, who has the ability to possess people’s bodies so he can keep changing his appearance and retain his youth. At the novel’s end, we learn that Paul’s father was possessed by Ozer during the fire, which explains his change of behavior.

Years pass, during which time Paul grows up, and then as a young man, he sees a grown-up Lotte, which surprises him since he thought she was always a little girl. Of course, the two fall in love, but before they can be together, Ahasuerus must wreak his vengeance on Ozer. Ahasuerus has repented for his sins and so his curse is to be lifted, but the other immortals have not repented. Ahasuerus battles Ozer to prevent him from taking another soul and he ultimately kills him. He also kills as many of the other characters in the House of Jews as he can. Here’s a little taste of Feval’s mockery of this battle of the immortals: “All these murders passed unnoticed, by courtesy of the civil war. Besides, every one of these brave Israelites had already been broken on the wheel, hung, executed by firing-squad and guillotined several times over, at various times. All of them are in the best of health as we inscribe these lines.” I actually do find this statement humorous, but other parts of the novel are less humorous and fall a bit flat in their attempts to mock the Wandering Jew theme, so that the novel is more like watching Dracula, Dead and Loving It than Francis Ford Coppola’s Bram Stoker’s Dracula. Of course, humor has its place, but great Gothic and Romantic literature can move the soul in a way such parodying cannot, and the novels Feval is mocking are, in my opinion, superior to his own.

In the introduction, Stableford explains at great length and with excellent detail the history of the Wandering Jew in French literature and how Feval’s novel is largely a response to Eugene Sue’s phenomenally popular novel The Wandering Jew (1846) and Alexandre Dumas’ unfinished serialized novel Isaac Laquedem (1853). I have not read Dumas’ novel, though I hope to someday (unfortunately, I don’t believe it’s ever been translated into English), but I do think Eugene Sue’s novel is a magnificent masterpiece of intrigue, mystery, and plotting, although I found the end a bit anticlimactic. Sue’s novel was also a tremendous influence on the later Gothic novels, including the British Gothic tradition, which is my primary interest, and especially on Dracula—Stoker was stage manager to the great actor Sir Henry Irving and once suggested he perform a play of Sue’s Wandering Jew. Stoker also wrote a book called Famous Impostors, in which he included a chapter on the Wandering Jew. Several people during the nineteenth century apparently claimed to be the Wandering Jew, which added to Feval’s mockery of the figure.

Part of Feval’s response to his contemporaries was a political response, as Stableford points out. The novel is set against the 1830 revolution (as referenced in the quote above as a “civil war”), and the novel makes many historical and political references to the period, references that are explained in the very helpful notes, but provide little interest to the modern and non-French reader. Yes, a Royalist Feval may have been responding to depictions by a Socialist Sue and a Republican Dumas, neither of whom he agreed with, but to the twenty-first century reader seeking a strong and meaningful story, little if any of these issues is of interest. Not that I do not find history fascinating, but politics tend to date a novel. Sue’s politics do not show through in his novel to such an extent, but Feval’s are just so much meaninglessness for the reader to wade through, hoping some story will finally evolve.

That hope is only slightly fulfilled since the novel is written in a very slap-dash, fragmented format. The chapters are extremely short—82 chapters in just 170 pages—and choppy, and the scenes between chapters jump about without adequate transitions. Feval begins by focusing on Paul and Lottie, the children, as if writing a children’s book, which seems to have been his initial goal, according to Stableford, but no child could read this book today, and while Feval initially wrote the book as one of three novellas in a collection, he later rewrote and expanded it into the current novel, which was published in 1878. The novel does, however, end with Paul and Lotte together, and a strange and confusing image that Lotte has been split in two so she can both be with Paul and with her father—you’ll have to read the ending to understand—I confess I still don’t get it.

Stableford provides many more sources for the novel and the Wandering Jew’s place in French literature during the nineteenth century, all of which I found fascinating since I am more knowledgeable of the British tradition. Certainly, it is valuable to have this novel translated into English, and while it is not particularly to my taste, it did not turn me off from wanting to read Feval’s vampire novels. More importantly, the novel is a significant link between past and present depictions of immortals and especially of how the Wandering Jew, who has disappeared from our modern literature (largely, I am sure for politically correct reasons), influenced the characterizations of vampires and even superheroes that we so enjoy today.

Tyler Tichelaar, Ph.D. is the author of King Arthur’s Children: A Study in Fiction and Tradition, The Gothic Wanderer: From Transgression to Redemption, and the Children of Arthur series. You can visit Tyler at www.ChildrenofArthur.com and www.GothicWanderer.com

Filed under Classic Gothic Novels, Dracula, Superheroes and the Gothic, The Gothic and the Bible, The Wandering Jew

21 responses to “The Wandering Jew’s Daughter: Paul Feval’s Mockery of a Gothic Tradition”