On September 12, 1866, the musical extravaganza The Black Crook premiered at the 3,200-seat Niblo’s Garden on Broadway. It would run for a record-breaking 474 performances and enjoy numerous revivals throughout the United States for the rest of the nineteenth century.

Today considered the first true American musical, The Black Crook was the result of a dramatic group joining forces with a Parisian ballet troupe. While a few new songs were composed for the show, such as “March of the Amazons” by Giuseppe Operti and “You Naughty, Naughty Men,” with music by George Bickwell and lyrics by Theodore Kennick, much of the music was adapted from other earlier sources. 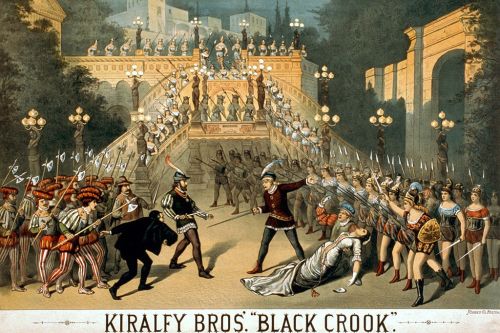 Poster from the 1873 revival of The Black Crook

The music must have filled a great amount of the show since it ran for five-and-a-half hours, yet the libretto of the play is only 62 pages and takes a little over an hour to read. Unfortunately, the libretto, as recently published by the Historical Libretto Series, contains little of the lyrics. The libretto is available at Amazon. Most commentaries on the play never mention the plot other than to say the story was badly written, but it really wasn’t that bad and quite typical of the day.

The show was a smash hit and the scanty costumes of the female cast raised quite a scandal. The New York Times called it “trashy” and the Rev. Charles B. Smyth, writing in the New York Herald, warned, “Let husbands and parents and guardians who value the morals of their wives, their daughters, and their wards, bear a watchful eye, and keep them out of the walls of Nible’s [sic] during the rein [sic] of The Black Crook.” Despite such warnings, the female costumes were rather modest compared to many today, though bare arms and lower legs could be seen.

More importantly, the musical was the product of its age’s fascination with the Gothic. When I first heard the title of this play many years ago, I assumed it was about an African-American thief and was perhaps a racist play created in the aftermath of the Civil War. Instead, it owes more to the European Gothic tradition than to anything American for its sources. Nor is the play very original in its Gothic themes. The playwright, Charles M. Barras, wrote the script after having been influenced by seeing a performance of the German Romantic opera Der Freischütz (1821) by Carl Maria von Weber.

I had never heard of Weber’s opera before, but after researching it, I think it clearly contains many Gothic elements common to the time period. It was itself obviously influenced by the Faust legend. In the opera, the main character, Caspar, whose soul is to be forfeited to the devil on the following day, hopes to obtain three more years of grace by substituting a young forester, Max, in his place. Caspar calls upon Samiel, the Black Huntsman, for assistance; however, in the end, Caspar is taken by Samiel instead of Max.

This basic plot of an evil character making a pact with the devil or a demonic being to gain a soul for the devil in exchange for youth or longer life was a frequent plot in other Gothic novels of the time as well, notably William Harrison Ainsworth’s Auriol, or The Elixir of Life (1844) and George W.M. Reynolds’ The Necromancer (1851-52). Earlier novels also focused on the idea of life extension, usually a Rosicrucian theme, such as William Godwin’s St. Leon (1799) and Edward Bulwer-Lytton’s Zanoni (1842). What is interesting is that while I have studied the Gothic in literature, the Gothic also permeated into music, and so a Gothic opera would influence the first Gothic musical probably more than Gothic literature did. One is left wondering whether Der Freischütz also influenced Reynolds and Ainsworth’s novels.

The Black Crook opens in the Hartz Mountains in the year 1600. Rodolphe is betrothed to Amina, an orphan girl whose foster mother, Dame Barbara, disapproves of the match because Rodolphe is an unsuccessful painter while Amina has had an offer made to her by a nobleman, Wolfenstein. When Wolfenstein comes to marry Amina, he has Rodolphe locked up in a dungeon.

Meanwhile, Hertzog, whom men call “the Crook,” is reading out of a cabalistic book, gleaning dark knowledge in forbidden paths. He has a servant, Greppo, whom he saved from drowning so Greppo obeys him. Greppo provides some comic relief in the story, but he also plays a role that reminds one of Caliban in The Tempest with Hertzog as a type of Prospero since Hertzog can summon spirits. Unlike The Tempest, however, Hertzog’s spirits are not bound to obey him but rather have some control over him. Hertzog longs to extend his life, so he makes a deal with Zamiel, a demon spirit, whom he summons. (Note the similarity between the spellings of Zamiel and the Samiel of Der Freischütz.) Zamiel promises Hertzog that for every soul he gives him, he will live another year; therefore, he can live forever if he continues to provide souls. This is similar to how in Reynolds’ The Necromancer, Danvers must convince six women to elope and marry him over the course of 150 years in exchange for incredible power; all those women’s souls are then lost to the devil. Zamiel tells Hertzog to begin by trying to capture Rodolphe’s soul since Rodolphe is in prison and likely to do anything to escape and marry the woman he loves.

Act II opens with Hertzog coming to Rodolphe in prison and offering to help him. Rodolphe, however, knows Hertzog is a sorcerer and does not trust him. Hertzog persists by telling Rodolphe that Amine is actually of noble birth, and therefore, Rodolphe will need gold so he can buy a noble status for himself and be worthy of her. He tells Rodolphe that there is gold in a mountain that he can get, and he gives him a magnetic ring to guide him to the gold. Since Greppo is a tiresome servant, Hertzog sends him with Rodolphe. He believes Rodolphe will become greedy in his quest and this will lead to both Rodolphe and Hertzog’s deaths.

However, once in the mountain caverns, Rodolphe manages to rescue Stalacta, the queen of a group of fairies, gnomes, and other beings. While disguised as a dove, she stumbled into a charmed circle of Zamiel’s. This rescue means that the fairies now protect Rodolphe. Stalacta warns Rodolphe that Hertzog has ill intentions toward him, and she gives him a circlet with a jewel to kiss if he’s in danger, and she will then come to his rescue.

In Act III, Rodolphe appears in costume at a masked ball at Wolfenstein’s castle. Wolfenstein and Rodolphe end up in a fight and Rodolphe kisses the circlet, leading to Stalacta and her fairies and nymphs arriving to rescue him. They are dressed as Amazons, hence the best known song from the show, “The March of the Amazons.”

In Act IV, six months have passed. Rodolphe and Amina have long since fled and Wolfenstein is searching for them. Once again, he finds them and once again Rodolphe kisses the circlet and Stalacta and company come to his rescue. This time, Wolfenstein is slain. Hertzog now appears and summons his fiends to burn down the forest to stop Rodolphe and Amina from escaping, but when Rodolphe again kisses the circlet, a rock opens and they enter a grotto. By now, a year has passed and Hertzog’s time to capture a soul has passed, so he is dashed into a flaming chasm that must have been a magnificent scene on stage. The play ends with a beautiful scene of Rodolphe and Amina, along with Greppo and Carline, a woman he loves, in the realms of Stalacta.

There are some subplots and some humorous moments amid the action, but that’s the basic plot. It is not a brilliant plot, but the Gothic atmosphere in the play is quite dramatic, and the special effects must have been magnificent as they depicted illuminated books, skeletons and other Gothic style monsters appearing on stage, costumed Amazons, a burning forest, a masked ball, a flaming chasm, and a beautiful grotto. As much as the story and the music are combined to make a musical, we can never underestimate the power of spectacle to wow an audience, and The Black Crook must have been a very impressive spectacle to keep audiences entranced for five-and-a-half hours.

By the time The Black Crook premiered in 1866, most of the great Gothic novels had been written. Gothic literature had had its heyday in the 1790s, and there had been a Gothic renaissance in the 1840s and 1850s with the popularity of penny dreadful literature. The Black Crook marked the end of this period that was heavily influenced especially by German Gothic literature, or in this case, German opera. But what a dramatic and spectacular show—this very unAmerican musical in its theme and setting—to become the first American musical. It’s not surprising then that the musical has ever since been a very popular vehicle for other Gothic tales that became popular musicals from Phantom of the Opera to Jekyll and Hyde and Dracula, just to name a few shows from more recent decades.

It is unlikely we will ever see a new stage production of The Black Crook. There was a 1916 silent film made of it, but even that does not appear available to the public. But you can view some photos of the production at YouTube. And we can dream of how splendid it must have been. What’s not to love about a grotto of fairies, a scheming villain in a pact with a devil, and an army of Amazons in “trashy” costumes.

Tyler Tichelaar, Ph.D. is the author of King Arthur’s Children: A Study in Fiction and Tradition, The Gothic Wanderer: From Transgression to Redemption, and the Children of Arthur series. You can visit Tyler at www.ChildrenofArthur.com and www.GothicWanderer.com

4 responses to “America’s First Musical Had Gothic Origins: Celebrating The Black Crook on Its 150th Anniversary”