In September, I visited Romania, having long wanted to see the land associated with Vlad Tepes (1431-1476), the Wallachian prince whom it is believed that Bram Stoker based Dracula upon. While I traveled throughout Romania, beginning in Bucharest in Wallachia and then traveling throughout the other two provinces, Transylvania and Moldavia, I will only discuss here the sites I visited associated with Dracula.

First, let me say that it is well known that Bram Stoker never visited Romania himself, and his knowledge of the country is based on research he did. He was originally going to set his novel in Styria, where J.S. LeFanu had set his vampire novel Carmilla (1872), but Stoker later changed the location to Transylvania. Romania actually has no vampire tradition that predates the publication of Dracula in 1897, although vampire legends can be found farther south in Serbia. It is also perhaps surprising to those seeking a Gothic atmosphere, but Romania is a beautiful, sunlit country, and even the Carpathian Mountains where Dracula’s castle is allegedly located are vibrantly green and more akin to German Alpine landscapes than the dark and dreary settings one associates with the Gothic.

The first Dracula location I visited was Sighisoara, a medieval town where Vlad Tepes was born. The city is known for its landmark gate/tower with a clock in it. Within about 100 yards of it is the house where Vlad Tepes was born. Today, it is the restaurant Casa Dracula. The restaurant features pictures of Dracula and even the napkins have Dracula designs. Upstairs, you can visit the room where Vlad Tepes was born for 10 lei (about $2.60). After climbing a staircase with cheesy Halloween decorations (witches and hanging skeletons), you arrive at the room where you see a body lying in a coffin. Then the live body jumps up to scare you. It is a momentary thrill, followed by a photo opportunity. In the next room are several pictures of Vlad Tepes, including one of him impaling people and a bust of him. One of my companions on my tour said the visit to the room was a total rip-off, but this was the second day of the tour and the first Dracula place of interest, so for me, it was the best moment up to that point.

Painting of Vlad impaling his victims at the birthplace

Dracula and Me at Vlad Tepes’ birthplace

Bust of Vlad at his birthplace

Just a couple of blocks from Vlad’s birthplace is the newly opened Dracula Investigation Museum. It has only been in operation for about four months, and I was happy to see that I was the first person from Upper Michigan to visit it, given the world map with pins you could stick in it.

This museum is decidedly low budget, but the presentation is quite artistically done. I believe the cost was 15 lei ($3.90). It takes about twenty minutes to see the museum. It consists of five rooms and there is an audio presentation to guide you through each room. The first room has a low ceiling and benches. You sit down to listen to the audio and watch a video shown on the ceiling that gives background information about Vlad Tepes. The museum’s purpose is really to tell a very accurate story about Vlad Tepes. The remaining four rooms continue the audio narration of Vlad Tepes’ life, with some mannequins depicting him and his brother Radu the Handsome and Sultan Mehmet (no mention of how Mehmet allegedly tried to rape Radu and may later have become his lover). The fourth room was cleverly done by using some small cut-out images hanging from the ceiling and then special lighting to cast shadows on the walls that tell the different parts of the stories. The final room has a bunch of bodies hanging from the ceiling to give you the impaler effect. At the exit are two baskets. People are asked to place a stone in the basket they think best reflects the truth—was Vlad a hero or a villain? The hero basket was three times as full as the villain basket, and I added my stone to the hero basket. Although Vlad’s tactics may not be commendable, he clearly did what he felt was best for his people to help them maintain independence from the Ottoman Empire and also to end corruption in his country. You can learn more about the Dracula Investigation Museum on Facebook at https://www.facebook.com/TheDraculaInvestigation/. I believe it’s worth a real-life visit. 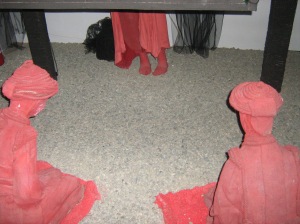 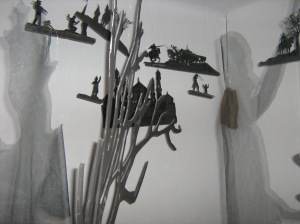 Bistrita is the town where in the novel Jonathan Harker stayed the night before he went on to Dracula’s castle. Stoker, however, uses the German spelling for it: Bistriz.

Honestly, there is not much to see in Bistrita associated with Dracula other than the Golden Krone Hotel, and it is a fake Dracula connection. Stoker has Harker stay at the Golden Krone in the novel, but the hotel is completely fictional. In the 1970s, a scholar visited Bistrita looking for a historical source for the hotel. An enterprising Romanian decided then to build the Golden Krone to cater to the tourist trade. The hotel is very modern and not very Dracula-themed other than a dining room named the Salon Jonathan Harker. In this room the walls are filled with ten pictures of simple images such as wolves, and each picture has a quote from Dracula in it. It was fun to sleep and eat there, but I wouldn’t say the Golden Krone was a highlight of my trip. 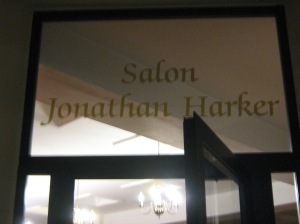 The Salon Jonathan Harker at the Golden Krone in Bistrita

The Carpathians and the Castle Dracula Hotel

From Bistrita we left the next morning and drove up into the Carpathians where we stopped at the Castle Dracula Hotel. The views from the mountain where the hotel is situated are quite impressive and one can see a monastery and a ski chair lift from there. A bust of Bram Stoker is located outside the hotel. One enters the hotel through a gate that leads into a courtyard. I would have liked to have stayed here because of the incredible views, although again, it is more a hotel built for tourists that uses Dracula’s name than anything really connected to Dracula. I did not see the interior, but the exterior was not overly Dracula-ish. That said, it claims to be built on the location where Stoker’s castle was set and to have been built in accordance with the descriptions of the castle in the novel. Wikipedia is skeptical but says the Hotel Castle Dracula is “located in Piâtra Fântânele in the Borgo Pass, which promotes itself as being constructed at the place of Stoker’s Castle, [but] at least is located at the point where Harker left the post carriage from Bistritz to Bukovina to be picked up by the Count.”

Bram Stoker and me in front of the Castle Dracula Hotel

Sign at the Castle Dracula Hotel warning people not to speed or they will be dead like Dracula.

Bran Castle is the place in Romania most people associate with Dracula, although this association is simply the result of the Romanians trying to cater to the tourist trade. Bram Stoker seems to have had no knowledge of the castle and it has only tangential connections to Vlad Tepes. Some historians believed he was imprisoned in Bran Castle, but now it is believed this is not true. Dracula’s castle, as described in the novel, in no way resembles Bran Castle. Poenari Castle (which I didn’t visit) appears to be a more likely choice for Dracula’s Castle, although again there is no evidence that Stoker was aware of Poenari either. Instead, we can conclude that Dracula’s Castle was solely the work of Stoker’s imagination. 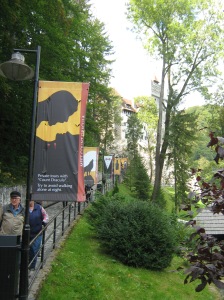 The climb up to Bran Castle is filled with cheesy vampire banners. 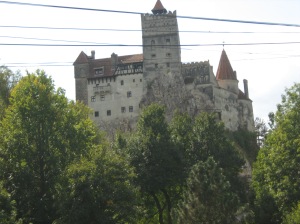 Nevertheless, Bran Castle is an amazing castle to visit. The views from the castle are superb, and the many winding staircases and twists and turns, as well as suits of armor and costumes on display, antique furniture, and the connection to Queen Marie of Romania, make the castle probably the most enjoyable place to visit in Romania (although Peles Castle, the Victorian palace built for the Romanian royal family is stunning also and worth a visit to Romania in and of itself). One room of the castle is devoted to Bram Stoker and the Dracula legend.

Below Bran Castle are a series of outdoor shops where you can buy everything imaginable concerning Dracula from snow globes to mini-castles, paintings, T-shirts, hats, and refrigerator magnets. Below are a few of my treasures I purchased.

Small original painting of the castle – about the size of a postcard. I also bought a 1000 piece Jigsaw puzzle and a small statue of the castle.

Back in Bucharest, I visited the Old Town, where the fortress associated with Vlad Tepes is currently under renovation. It is the oldest building in Romania, and Vlad lived there for six years. It is currently closed to the public, though I was able to get a picture of the statue of Vlad Tepes through a hole in the green fencing surrounding the property.

Statue of Vlad in the fortress undergoing renovation

Also in Bucharest is the Dracula Museum, which had only opened two weeks before so I knew nothing about it. My Bucharest city tour guide, knowing I was interested in Dracula, took me there, but it had closed early that day to my disappointment and it was my last day in Bucharest. The museum is located in the second oldest building in Bucharest. One floor is devoted to the life of Vlad Tepes and the other to Stoker, Dracula, and all the many film versions of the novel. The museum can be found on Facebook at Dracula Museum. 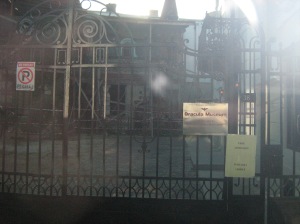 The place in Romania I most wanted to see was Snagov Monastery where Vlad Tepes was buried. My tour did not include Snagov, but my travel agent had booked a separate day trip to it for me. However, I was the only person who signed up for the trip that day so it was cancelled and I could not find another way to get to Snagov that day, so I had to miss it. However, Romania is such a beautiful country that I hope to go back again someday and visit not only Snagov but some of the other Dracula sites I missed, including Poenari Fortress, which requires climbing 1400 steps to visit.

Snagov Monastery – like King Arthur, Vlad was buried on an island, but his body later disappeared, giving rise to the possibility he became a vampire.

So those are the Dracula sites of interest in Romania, but while Dracula is a primary reason people visit Romania, I want to say that Romania is a beautiful, marvelous country that deserves to be known for so much more than just Dracula. It is filled with incredible painted monasteries, master painters of colored eggs, stunning and unique architecture, breathtaking mountain views, kind and friendly people who have overcome their Communist past with courage, and people just like you and me who are kindhearted and eager to be citizens of the world. It is an incredibly safe country—even Bucharest with its 4,000,000 people was incredibly safe and I never feared walking around it by myself—and it is an inexpensive country. Everything cost about half to two-thirds of what I would have paid in the United States. Please, go see Romania for a rich cultural experience like no other.

Tyler Tichelaar, PhD, is the author of King Arthur’s Children: A Study in Fiction and Tradition, The Gothic Wanderer: From Transgression to Redemption, The Children of Arthur novel series, and Haunted Marquette: Ghost Stories from the Queen City. Visit Tyler at www.GothicWanderer.com, www.ChildrenofArthur.com, and www.MarquetteFiction.com.