After Ninety Years: The Story of Serbian Vampire Sava Savanovic is a Serbian novella by Milovan Glisic, first published in 1880. Glisic was a Serbian translator, author, and dramaturg; he translated many authors into Serbian, including Jules Verne and Edgar Allan Poe, who both wrote about Gothic themes themselves. It’s noteworthy that this novel was published seventeen years before Dracula, not because it influenced Stoker, since it wasn’t translated into English until 2015, but because it depicts vampire elements that are not the conventional ones Stoker popularized; rather, Glisic’s novella draws on folklore and is more true to the original vampire tradition as a result. After Ninety Years has now been translated into English for the first time by James Lyon, himself the author of the vampire novel Kiss of the Butterfly, which is set in the Balkans and explores Vlad Tepes’ time there. 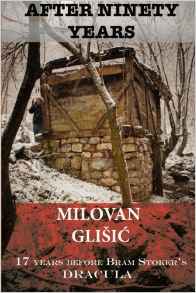 The book contains both a note from the translator that talks about the translation and Serbian vampire literature and an introduction by Andrew Boylan that discusses the novella, how it differs from Dracula, and also how it compares to the film based on it—Leptirica by Đorđe Kadijević, made in 1973.

Spoiler alert: I will describe the full plot because it’s necessary to understand the vampire elements used in the work. (I will not attempt to reproduce Serbian accents and other marks.)

The story is not long and fairly simple. There is a village in Serbia in which a wealthy man, Zivan, who is the kmet (mayor or leader) of the village has a beautiful daughter named Radojka. A young man, Strahinja, is in love with Radojka, but Zivan refuses to let Strahinja marry her. Zivan’s anger causes Strahinja to leave the village. He ends up going to the neighboring town where the villagers are having a serious problem. They have no miller and whenever they get one, he is found dead in the mill the next day, usually with a red mark around his throat as if he had been hung. (At this point, the villagers do not realize they are up against a vampire. It’s significant that there is no mention of bite marks on the victim’s neck. Instead, the vampire seems to suck out his victims’ blood simply by touching them; unfortunately, the novel is not gruesome enough to show us the vampire preying on his victim, so it’s left somewhat unclear how he satisfies his bloodthirst). Strahinja decides he will play miller to solve this mystery. He hides up on the mill’s loft with two pistols to see what might threaten him.

Enter the vampire. He comes into the mill and Strahinja can see he is a tall man with a face as red as blood and over his shoulder he carries a shroud which stretches down to his heels. (A footnote here explains that in Serbian tradition, the vampire lies in his death shroud and if he loses it, he loses his power. One wonders whether this is why vampires are often depicted with capes in English literature—perhaps a misunderstanding of the death shroud.) The vampire then says out loud to himself, “Oh, Sava Savanović! For 90 years you’ve been a vampire, and you’ve never gone without supper as you have this evening!” This statement explains the novel’s title. Strahinja needs no more information than to know his enemy is a vampire before he decides to shoot him. When the smoke from the pistols clears, the vampire is gone.

Strahinja goes to the other villagers, who are amazed he is alive, and tells them his story. They have never heard of anyone named Sava Savanovic, but they decide an old woman in the village, Mirjana, might know of him because she is older than ninety. (A footnote here reminds us that this novella is based on folklore and that Mirjana was a real person said to have lived to be 110-120 years old. I should note here also that the translator went to Serbia to visit all the places associated with this vampire legend and found that how Glisic relates the story has some variation in the folklore, so it’s not known what he changed or embellished or if he wrote down an accurate version of what he heard.) Mirjana says she remembers Sava from her youth and that he was an evil man. She then tells the villagers where he was buried.

Of course, the villagers are now determined to find Sava’s grave and destroy him. To do so, they need three items: a black and ungelded horse who will be able to locate the grave, holy water, and hawthorn stakes. (The footnotes clarify that hawthorn was symbolic because it is what Christ’s crown of thorns was said to be made from. More relevant to vampires, it lets out trimethylene which is attractive to butterflies so they will often cluster on hawthorn branches. Butterflies are important here because corpses also release trimethylene, which causes butterflies to be attracted to decaying bodies. As a result, butterflies are often seen in cemeteries. The other important thing here is that butterflies were associated with the soul, and it was believed a butterfly (the soul) would fly out of the mouth when a person dies.)

The villagers, with the help of the horse, find the grave. The horse seems to sense where the vampire lies and starts digging in the appropriate place. Once the grave is dug up, the villagers open the coffin and find Sava lying there, his corpse undecayed and looking bloated from drinking blood. They plan to pour holy water down his throat, but they spill it, which awakens him. They have warned each other not to let a butterfly escape from his throat—apparently they would have drowned it with the holy water, but the butterfly does escape. Regardless, they stab the body with the hawthorn stakes to kill the vampire, and they tell themselves it’s no matter that the butterfly escaped because it can’t hurt “grown people.”

The villagers then decide that because of Strahinja’s bravery, he deserves to marry Radojka. They make a plan to kidnap her, which Strahinja argues against but finely gives into, and so Radojka is abducted. Her father comes after them and tries to shoot the abductors, but in the end, he comes to his senses and Radojka and Strahinja are married.

As for the butterfly, it’s said that it killed several children before finally disappearing from the region. (Apparently only “grown people” matter to the villagers.)

I admit I was a bit disappointed by the simplicity of the story—though, it is well told and has a marriage plot and happy ending with its Gothic tale at the center. It is more like a fairy tale, however, than a Gothic story—in the tradition of the young man who must do a fabulous deed to be worthy of the king’s daughter, kind of story, although the royal trappings are gone.

That said, it is worth reading. The translator’s note and introduction make several good points about the significance of the story. They explain how vampires were part of the pagan Slavic people’s mythology, but most of it was erased by Christianity so we can’t really understand the vampires’ place in that mythology today. There was a long history, however, of vampire stories in this culture. The concept of the vampire dates to ancient times, but the word vampire itself first appeared in Serbian in 1725 and then was translated into English and other languages in 1732. Because the vampire is based in folklore, it comes from a long oral tradition and is not the invention of fiction writers. While After Ninety Years could not have influenced Bram Stoker, the vampire folklore tradition from this period may have. Boylan notes that The Pobratim: A Slav Novel contained numerous Slavic folktales in it, including mention of vampires, and published in 1895 by Professor P. Jones. I wonder whether Stoker read The Pobratim and it influenced his creation of Dracula.

Glisic’s novel, although not a direct influence on the vampire of Western literature and film today, regardless is an interesting part of the history of the vampire’s development. While not a major work, it is an entertaining and very readable story with plenty of humor and an overall theme of good, or at least love, overcoming prejudice and evil.

Tyler Tichelaar, Ph.D., is the author of The Children of Arthur series, beginning with Arthur’s Legacy and including Lilith’s Love which is largely a sequel to Dracula. His scholarly nonfiction works include King Arthur’s Children: A Study in Fiction and Tradition and The Gothic Wanderer: From Transgression to Redemption, which is a study of the Gothic tradition from 1794 to the present. You can learn more about Tyler at www.GothicWanderer.com and www.ChildrenofArthur.com.