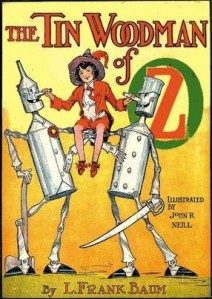 L. Frank Baum, best known as author of The Wonderful Wizard of Oz and its many sequels, may seem unlikely as a Gothic author, but he was heavily influenced by the Gothic (and fairy tale) traditions, as evidenced by his wicked witches of Oz, among other characters. Baum wanted to create fairy tales that were not scary, although anyone who saw the film The Wizard of Oz (1939) as a child knows just how scary Margaret Hamilton was as the Wicked Witch of the West. Nevertheless, there is a benevolent sense that all will turn out for the best and good will triumph over evil that pervades the comic world of Oz.

Since I was eight years old, I have been a fan of Baum’s fourteen Oz books and have read almost all the other books as well that he wrote. The Oz books, more than probably any other books, are my constant source of comfort whenever I need escapism and I still go back and reread them over and over. Recently, I reread The Tin Woodman of Oz (1918), the twelfth book in the series, and the one I have often thought the least interesting, but this time, after having worked so long on writing my book The Gothic Wanderer, I am more aware of Gothic elements in other works and was surprisingly engrossed by this book’s Gothic themes.

It might be a stretch to say the book is Gothic, but it does introduce a young boy named Woot the Wanderer, more a romantic than Gothic wanderer, but a wanderer nonetheless. There is also a giant Yookoohoo (an enchantress who does transformations), Mrs. Yoop, who turns Woot, The Tin Woodman, and their companions into various animals, and there is the Lonesome Duck, quite the melancholy and isolated Gothic character. But most Gothic of all is Chopfyt, Baum’s own version of the Frankenstein Monster.

In The Wonderful Wizard of Oz, the Tin Woodman recounts how he was in love with Nimmie Amee, but the Wicked Witch of the East disapproved of the relationship and enchanted his ax so that he cut off his various body parts. He took these to Ku-Klip, the tinsmith, who then kept the arm or leg, etc. and made the Tin Woodman a new one out of tin until eventually he was completely made of tin. At the beginning of The Tin Woodman of Oz, the Tin Woodman decides he will find Nimmie Amee and ask her to marry him after all these years.

After many adventures, the Tin Woodman and his friends meet the Tin Soldier, who had fallen in love with Nimmie Amee after the Tin Woodman. He had a similar experience and ended up made completely of tin as well. Together, these two tin men and their companions arrive at the tinsmith’s shop to inquire whether Ku-Klip knows where Nimmie Amee now lives. Seeing that Ku-Klip is not home, they look about the shop, and before long, they find their arms and legs in pickled water, and horror of horrors, the Tin Woodman finds his own head staring back at him and it talks. Because it is separated from the rest of its body, including its heart, the head is not overly intelligent or polite. Nevertheless, no one can die in Oz, so a talking head sits on a shelf in the tinsmith’s shop, alive for all time.

It is a shocking moment in the novel, and quite an uncomfortable and disturbing one, but not as disturbing as what comes next. Ku-Klip returns, and when asked what he did with the Tin Soldier’s head, he confesses that he took the best pieces of both tin men’s original bodies and created from them Chopfyt, whose name is a compilation of the Tin Woodman’s real name Nick Chopper and the Tin Soldier’s name Captain Fyter.

The tinsmith now tells them where Nimmie Amee lives so the two tin men go to find her, agreeing they will abide by her decision which of them she’ll have. But horror of horrors, they find she is now married to Chopfyt, who resembles the two of them and even has a tin arm of his own.

In Mary Shelley’s Frankenstein, one of the most terrifying moments is when the Monster demands that Victor Frankenstein create a female mate for him. At first, Victor begins to create such a female monster, but then he realizes these monsters could ultimately breed a race of monsters who will conquer the human race, so he destroys the female monster before it is brought to life. In revenge, the Monster kills Victor’s bride, Elizabeth, on their wedding night. Baum reverses this scene, not having the Monster kill the bride, but instead marry her, and she even prefers the Monster.

The creation of Chopfyt – an illustration by John R. Neill for The Tin Woodman of Oz

Both the Tin Soldier and the Tin Woodman offer themselves to Nimee Amee, but she tells them she will keep Chopfyt rather than having to scold and chide a new husband into knowing her ways, and while Chopfyt is not “agreeable”—Woot later says he’s a total “grouch”—she will stick with her monster man.

I do not know whether L. Frank Baum ever read Frankenstein, and the novel was not as popular during his lifetime as it was later in the twentieth century when it became part of popular culture because of its film versions, but doubtless, he was an innovative author able to capitalize on terrifying themes and turn them into benign and comical, if still, disturbing Gothic moments, in his novels. Like Shelley’s, Baum’s imagination knew few boundaries.