Anne of Geierstein (1829) is Sir Walter Scott’s most Gothic novel and probably the last true masterpiece that he wrote. It was well-received in its time and holds up remarkably well still today. Despite Scott’s typical slow-pacing, the reader is moved on from one dramatic scene to the next so that the novel makes an overall powerful impression.

An illustration of Arthur Philipson trying to cross over the ravine. Illustrator and source unknown.

The story begins with a merchant named Phillipson and his son Arthur who are English but traveling through Switzerland in the 1470s. When the son takes a path that results in his nearly falling off a cliff, he finds himself perched in a tree with a ravine below him that he dare not try to cross. Enter Anne, our heroine, who, as nimble as a mountain goat, jumps across to the tree and convinces him he can jump back, which makes him feel a bit silly considering we will soon find out he is a brave knight and that he and his father are traveling in disguise.

The Philipsons continue their journey with the party of Anne’s uncle, whom they learn was the rightful heir to Geierstein, a nearby castle, but he had given up his title to his brother, Albert of Arnheim, who is rather a villain. Anne is under her uncle’s protection. Of course, young Arthur soon falls in love with Anne.

But Arthur and his father have other concerns. Arthur’s father is the Earl of Oxford and they are traveling to the Duke of Burgundy to enlist his aid in the Lancastrian cause. This eventually leads them also to Anjou where lives Margaret of Anjou in exile now that her husband Henry VI and her son Edward have both died. She lives at her father’s court in misery while her father tries to distract her with frivolous entertainments.

Enough about the plot. Let’s get to the Gothic moments. The moment Arthur finds himself facing jumping from the tree across a gulf might be termed the first Gothic moment, for it is a moment of fear for Arthur, even though there is nothing supernatural about it. Switzerland with its mountains and sublime landscape had already been a popular setting for other Gothic novels, notably Frankenstein (1818), so it is an appropriate Gothic setting in which the landscape creates fear and awe.

Next, Arthur’s interest in Anne results in his hearing the history of her family. Her grandfather, Herman, Baron of Arnheim, took a stranger into his castle who needed his protection. Although the stranger, a Persian named Dannischemend, says he could only live for a year and a day, he begs the Baron to protect him during that time. The baron agrees in exchange that Dannischemend teach him his secrets since he’s a member of the Sacred Fire. The Persian agrees to this, but when the year comes to an end, he asks for his daughter to have shelter in the castle, and in exchange, she will then also teach the baron. However, the Persian warns the baron not to fall in love with her. Despite this warning, they do fall in love and are eventually wed. The legend then says that they had a daughter, and at the christening, the baron allowed a drop or two of holy water to fall on his bride, who then turned to ash. The story recalls that of the French medieval fairy Melusine, and many other fairy-type characters who were pagan and unable to be baptized or to live as Christians. Although later Arthur hears the truth of what happened to Anne’s grandmother and knows he should dismiss this story as a false legend, his next encounter with Anne makes him wonder whether there may be some truth to Anne having a supernatural parentage. 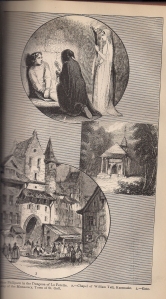 Several illustrations from the Collier Books edition of The Waverley novels. These illustrations for Anne of Geierstein depict scenes of Switzerland and Arthur being visited in the dungeon by Anne.

More specifically Gothic is the moment when Arthur finds himself imprisoned in a castle, only to have Anne and another woman appear to him through means inexplicable at first, making her appear like an elemental spirit. He cannot explain how these women entered the prison, and being under a vow, Anne cannot speak to him, which adds to the mystery. Of course, Anne leads Arthur out of the prison. Eventually, Anne explains how she was able to appear in Arthur’s prison, and any hint at the supernatural is resolved, just as it would be in one of Radcliffe’s novels.

Perhaps the most stunning Gothic moment in the novel is when Arthur’s father rents a room in an inn. As he is lying in the bed, he finds himself suddenly strapped to the bed as a prisoner. The bed is then lowered through the floor into a mysterious subterranean chamber where he becomes the prisoner of the Holy Vehme, a secret organization that has taken upon itself to judge men for their crimes. It is also known as the Initiated, the Wise Men, and the Secret Tribunal. Dressed as monks, the members of the Holy Vehme interrogate Philipson in a manner that recalls scenes of the Inquisition in Radcliffe’s The Italian (1797) and Maturin’s Melmoth the Wanderer (1820). Although accused of slandering the Holy Vehme, Philipson is finally set free.

Scott now begins to cast aside the love story and focus on Arthur and his father’s mission. They travel to Anjou to meet Margaret and her father. These scenes are some of the most powerful in the novel as we are introduced to a King Rene who engages in merriment and a Queen Margaret who is grieving her losses. Margaret, unable to enjoy her father’s frolicsome ways, does not live in his castle but at the nearby monastery. In a dramatic scene, Arthur meets with Margaret at the monastery to tell her what luck they’ve had negotiating with the King of Burgundy to aid the Lancastrian cause. Margaret is willing to make sure Burgundy gets Provence from her father in exchange for his aid, though her father is less willing to agree to it. Margaret and Arthur meet on a parapet where Arthur finds her seated with her disheveled hair tossing about in the wind. She is described as noble and beautiful, yet having ghastly and wasted features. Arthur feels terror because a storm is approaching, and he beseeches her to go inside, but she refuses because monks and walls have ears.

Margaret tells Arthur that there is a cavern beneath the monastery where in pagan days people went to consult an oracle whose voice comes up from the cavern and is known as Lou Garagoule. Roman generals once consulted it, but this oracle is deaf to Margaret’s inquiries. This scene shows the desperation the queen feels in seeking supernatural aid. It reminds one of Gothic wanderer figures willing to sell their soul to the devil to achieve what they desire, including forbidden knowledge of the future. Margaret, in her desperate and bereaved state, certainly wins the prize as the most Gothic wanderer type character in the novel. Soon after Arthur’s meeting with her, Margaret dies.

The central illustration depicts Arthur and Margaret on the parapet.

The novel seems to lose its impact once Margaret dies. Anne is absent from the novel for about a third of it during this time. Toward the end there are some battles that then lead to a happy ending with Arthur and Anne being married. For a while the couple live in Switzerland until Henry VII gains the throne of England, and then they travel there to live and Anne becomes an ornament at the English court.

Sir Walter Scott, though we might consider him the father of the historical novel, takes many liberties with history in Anne of Geierstein, so we might term this book more akin to a Gothic romance in keeping with Mrs. Radcliffe’s novels than just historical fiction, despite the introduction of many historical characters. I consider it romance because of the broad use Scott makes of history to serve his narrative purposes rather than letting history create the outline for his narrative. No self-respecting present-day historical novelist would play fast and loose with history to the extent Scott does. He allows Margaret to die in 1476 when she did not actually die until 1482, and he allows King Rene to outlive her when he actually died in 1480. Worse, while the Earl of Oxford did support the Lancastrian cause, he never even had a son named Arthur so our main hero and our heroine are completely fictional.

Regardless, Scott’s portraits of his characters are remarkable, and I think his depiction of Margaret of Anjou easily rivals that of Shakespeare in the Henry VI plays. Also fascinating is Scott’s use of the Holy Vehme in the novel which surely must have inspired George W. M. Reynolds’ Faust, or The Secret of the Tribunals (1847), which also features the Holy Vehme in its plot. Scott also knows how to take a fascinating moment in history and make it come alive in complex ways as reflected in his depictions of the court of Burgundy, the court of King Rene, and the various political implications involved. Scott may not always be historically accurate, but he makes history come alive, and he inspires the reader to want to learn more about the history behind his novels. At the same time, his characters reflect the true pathos and the broken hearts that result from some of history’s most tragic moments in a way few reliable historians can accomplish.

A volume of the 9 volume set of Waverley novels published by Collier in New York. No date is printed in the book but a former owner wrote a date of 1887 in one volume. I have owned them since 1993.

Tyler Tichelaar, PhD, is the author of King Arthur’s Children: A Study in Fiction and Tradition, The Gothic Wanderer: From Transgression to Redemption, The Children of Arthur novel series, and Haunted Marquette: Ghost Stories from the Queen City. Visit Tyler at www.GothicWanderer.com, www.ChildrenofArthur.com, and www.MarquetteFiction.com.