Diana Gabaldon’s Outlander series has taken the world by storm. Since the first book’s publication in 1991, the series has grown into eight novels, a spin-off series, and a television series on Starz. However, it was because Outlander placed second, after To Kill a Mockingbird, in the PBS Great American Read that really made me want to know what all the fuss is about. And so I read the first book, and my comments here are based primarily on that book and not the sequels or the TV show.

But given my title above, readers interested in the Gothic will want to know if there are vampires in Outlander? No. In fact, it’s not Gothic at all, but what interested me most were its vampiric scenes. But first, a short summary for those who haven’t read the books. Warning: There will be some spoilers here.

The novel starts in 1945. Claire Randall, a former combat nurse in World War II is on her second honeymoon with her husband Frank Randall in Scotland. When they visit an ancient stone circle, she suddenly finds herself back in Scotland in 1743 where she is a Sassenach (Scottish for Outlander, or more appropriately someone not from Scotland). I won’t go into all the details beyond the fact that she meets up with two men of significance for this discussion. The first is the handsome young James “Jamie” Fraser, a big, strong hunk of a man a few years younger than her, who is an outlaw and wanted by the British. And then there’s the villain, Captain Jonathan Randall, a British soldier out to get Jamie. Claire instantly dislikes Captain Randall, but she also knows from time doing genealogy that he is her husband’s ancestor.

A lot happens in the book—and there a lot of pages—850 in my copy. A good editor could have cut it down to 500. It’s way too long and goes on and on often without seeming to know exactly where it’s going. But in the end, Claire has to choose between her love for Jamie—she ends up being forced into marriage to him for her own protection—or trying to return to the ancient stone circle to be transported back to her own time and her husband Frank. She ultimately decides to stay with Jamie, but that choice has its dangers, not least of which is that he’s a hunted man.

Toward the end of the novel, Captain Randall captures Claire and threatens to rape her. Jamie, who has already been beaten, offers himself in her place. Claire is then freed, while Jamie is kept in prison. Out of spite, Claire then reveals to Randall his future—the date of his death—which she knows from her husband’s genealogy.

Jamie, in prison, agrees to let Randall have his way with him if he will let Claire go free.

Claire now works to free Jamie, but not before Captain Randall has his way with Jamie—Randall is a homosexual and Jamie is a very attractive young man. Here is where the vampirism comes in. After Jamie is freed, he reveals to Claire what happened between him and Randall. And it happened because Jamie allowed it to in exchange for Claire’s freedom. Randall took a knife and drew it across Jamie’s chest, causing him to bleed. Then he dipped his finger in Jamie’s blood and licked it off his finger. Then he applied his mouth to Jamie’s chest and sucked his blood. Jamie says it didn’t hurt but felt “verra queer.”

This scene of sucking blood from a man’s breast comes right out of Bram Stoker’s Dracula (1897) where Dracula forces Mina to suck blood from his chest. It should be noted that Stoker’s novel is full of homosexual overtones, but he never allows his vampires to prey on men directly. The opposite is true in Outlander. Randall willingly engages in homosexual activity. And it gets worse. He then spreads Jamie’s blood on his penis and has Jamie suck it off. Gabaldon is vague in her description of this since Jamie would feel uncomfortable being explicit about what happens, but regardless, Jamie definitely performs fellatio on Randall. (Interestingly, in the TV series, while Randall is shown stroking Jamie’s penis and probably sucking it (he bends down below the camera’s angle) and later buggering Jamie, we never see Jamie engaging in pleasuring Randall. Too intense for television, I guess.)

Later, Randall tells Jamie he loves him and tries to force Jamie into saying he loves him as well, which Jamie refuses to do. Randall then falls into a distrait psychological state where he tells Jamie he knows he loves him, but in the process, he begins calling Jamie “Alex.” Claire is shocked as she hears this because the only Alex she knows of is Randall’s brother, Alexander.

Gabaldon’s villain acts like a vampire, and the implications here are that he is not only homosexual but has also committed incest. While Outlander is far from a Gothic novel—it’s a romance novel with some historical fiction trappings—Gabaldon is using Gothic themes here since incest often occurs in Gothic novels or at least is threatened, usually by a villain who doesn’t realize he’s about to rape his own daughter, as in Ann Radcliffe’s The Romance of the Forest (1791).

Personally, I find Gabaldon’s use of Gothic themes here to be repulsive, primarily because I feel the novel is homophobic since it casts a gay character in the role of villain. I honestly was not very interested in Claire or Jamie, but I find I feel sorry for Captain Randall, who is obviously a tormented soul. Does he perform vile acts? Yes. He does it not because he’s gay but because he’s violent and enjoys using his position to gain power over Jamie. But Randall is also clearly tormented about his homosexuality and the romantic feelings he cannot have returned. Captain Randall is a true Gothic wanderer. In fact, his nickname is Black Jack, which Jamie says refers to the blackness of his soul.

I am tempted to say Gabaldon is homophobic in her portrayal of Captain Randall. Why must the gay man be the villain? And there is another gay man in the novel, the Duke of Sandringham, who also preys on innocent young boys and even tried to have his way with Jamie when he was a younger man. Of course, Jamie is an attractive man, so all the gay men are going to want him, but why must gay men be treated like villains who use their positions to rape other men? I have seen similar situations depicted in other novels by female authors, and I really don’t understand it. It makes one think women hate gay men because they steal other men from them, or some such illogical belief. In real life, I believe, though I could be wrong, that it is rare that a gay man is a bully to a heterosexual man. Typically, it is the other way around. 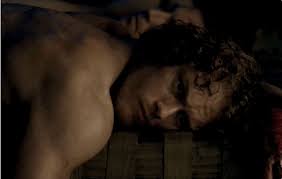 Jamie and Randall lying beside each other after the buggering.

That said, Gabaldon’s spin off series is about Lord John, who appears in the second novel in the series, and then gets his own series, and Lord John is a gay man, so perhaps she is trying to redeem herself for her depiction of Captain Randall by depicting gay men positively in her later books.

The other interesting thing is that Randall ends up being trampled to death at the end of the first book, which is not conducive to what Claire knows of his history, including that he married and had children. If he died, then her husband Frank never would have lived, and yet Claire realizes that after Randall dies, the ring she wears that Frank gave her has not disappeared, so Frank must still exist in the future. (Spoiler alert: Randall turns out not to be dead, but the reader doesn’t know this until Book 2: Dragonfly in Amber.)

One other interesting fact is that Frank and Captain Randall resemble each other so much that when Claire first meets Captain Randall, she thinks for a moment he is her husband. Her hatred for Randall suggests she may have negative feelings about Frank himself that she has yet to resolve.

In any case, whether consciously or not, Gabaldon hearkens back to Dracula in her novel and equates homosexuality with vampirism, thus equating homosexuality with evil. In the end, Captain Randall is a tormented Gothic wanderer trapped in a novel where the author refuses to have any sympathy for him, simply because he is gay and his need to express his sexuality could exist in no other way than violence because his society would not have approved of it. In fact, if he is violent, it is because he can only express his sexuality in relation to men he has power over, for if he tried to show affection for a man who was his equal or superior, he would be exposed, and probably punished or beaten, and even killed.

Note: Since first drafting this article I have read the second book and I have watched two seasons of the TV show. But that does not change what the first book says, even though Gabaldon did try to redeem herself in her treatment of gay characters in future novels. Because the reader finishes the first book believing Randall is dead, a bad taste remains in the mouth that in Gabaldon’s world being gay has to result in a death sentence for a character, and I am left thinking, “Rest in peace, Jack Randall.”

But wait, Randall isn’t dead. It is as if he resurrects—yet another sign he might be a vampire.

Tyler Tichelaar, PhD, is the author of King Arthur’s Children: A Study in Fiction and Tradition, The Gothic Wanderer: From Transgression to Redemption, The Children of Arthur novel series, and Haunted Marquette: Ghost Stories from the Queen City. Visit Tyler at www.ChildrenofArthur.com and www.GothicWanderer.com.