The True Cross, British Myth, and the Wandering Jew

I’ve long wondered about the truth behind theories that Helena, the Roman Emperor Constantine’s mother, was a British princess. As with the legend of King Arthur, we’ll probably never know the truth about her birth, but since I love the Arthurian legend, I like to think it’s true, and even that she is an ancestor to King Arthur himself since King Arthur is often theorized to be Constantine’s descendant.

Consequently, I was excited when I found out that one of Britain’s greatest twentieth century novelists, Evelyn Waugh, had written a book about St. Helena. I was even more excited when I read in the book’s preface that the Wandering Jew—a favorite figure from Gothic literature—makes an appearance.

Helena, published in 1950, actually was considered by Waugh to be his best work. I’m afraid that most critics, myself included, don’t agree. Otherwise, I’d have heard of the book long ago since I’ve read several of his better known—and better—novels such as A Handful of Dust and Brideshead Revisited. But being Catholic, an Arthurian enthusiast, and a scholar of British literature, I was curious to know how Waugh—a Catholic novelist—would treat the subject of St. Helena.

I had really high hopes when I read George Weigl’s introduction to the book (I read the Loyala classics edition; Loyola is a Catholic publisher). I’m not a big fan of modernism and its lack of real meaning and the relativism it often favors. I don’t pretend to be completely traditional in my thinking as a Catholic, but I do appreciate a devoutly written book, and even more, one that is realistic and not sentimental. I’m afraid, however, that the introduction by George Weigel and Waugh’s Preface were the best part of the book for me. Weigel refers to how Waugh was against Gnosticism and the meaninglessness of life that it depicts. I think Weigel misunderstands Gnosticism in this description (or is relying on Waugh’s limited understanding of it in an era when many ancient Gnostic texts were just being rediscovered and would change our understanding of them), but clearly Waugh was against it—he shows Helena thinking it’s all “bosh” and I have to admit that the Gnostic texts I’ve read haven’t made much sense to me either—Waugh’s depiction of their convoluted mysticism is a pretty fair portrait—although I appreciate the recent revival of them and the spiritual message they try to express. I don’t have space here to debate their value, but Waugh should have given them less short shrift.

What I liked best about Waugh’s book is that Helena is depicted as a no nonsense person. Whenever she is introduced to any religious ideas, she constantly asks, “How do you know it’s true?” In the end, she decides Christianity must be true because there are eyewitness accounts of Christ’s life, and if Christ lived, there has to have been a cross so when she finds the True Cross, she has proof of the religion’s validity.

I also liked that in the Preface, Waugh dismisses the disbelief of so many people about the relics of the True Cross in existence in Europe, stating “We do know [how we know Waugh doesn’t say] that most of the relics of the true cross now venerated in various places have a clear descent from the relic venerated in the first half of the fourth century. It used to be believed by the vulgar that there were enough pieces of this ‘true cross’ to build a battleship. In the last century a French savant, Charles Rohault de Fleury, went to the great trouble of measuring them all. He found a total of 4,000,000 cubic millimeters, whereas the cross on which our Lord suffered would probably comprise some 178,000,000. As far as volume goes, therefore, there is no strain on the credulity of the faithful.”

While I appreciated this no nonsense approach, I found the book’s overall tone somewhat tiring. Waugh’s sarcasm and cynicism and straining attempt to be funny do not support the theme or message he’s trying to deliver. The book’s style is that semi-humorous, tongue-in-cheek style of his contemporaries from the first half of the twentieth century, authors like John Erskine and T.H. White, and with all of them, I feel the result is a style that shows it is trying too hard to be funny, perhaps because it doesn’t know what it’s real subject is or how to take it seriously—perhaps afraid to take it too seriously from fear of failing in the attempt.

Certainly, there is nothing funny in this book about Helena’s husband cheating on her, her son imposing religion on the empire for political motives, or his murdering his family members. The humor may not be laugh out loud funny, but it could use some toning down.

What I enjoyed most about the book was how Waugh played with myths and legends. The Wandering Jew, whose connection to finding the True Cross in the novel is Waugh’s own invention, makes his appearance when Helena is in Jerusalem looking for the cross. Since he was at the event, he is able to guide her in knowing where to find the cross. Waugh has the Jew appear to Helena in a dream to give her the information, perhaps to avoid the novel losing its feel of realism. Waugh doubtless was aware of the Wandering Jew as a standard of Gothic literature, but he in no way depicts the Jew as a Gothic figure. 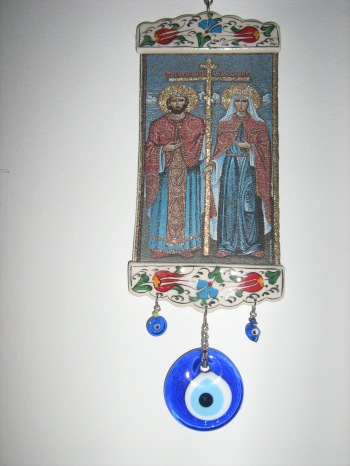 This is one of my favorite images of St. Helena, the Emperor Constantine, and the True Cross. I bought it in Turkey, which is the other competitor, along with Britain, for being her birthplace. This icon combines religion and superstition. Those are evil eyes hanging from it.

Waugh also plays on the legend that Helena was a British princess and her British family are descendants of Brutus, himself a descendant of Aeneas, and consequently, of the royal family of Troy, another part of British mythology which many have tried to disprove and may well not be true, but makes for a great part of the Arthurian story.

In the end, I don’t think Helena is a fabulous book. In fact, the pivotal moment when Helena becomes a Christian is brushed over, and I feel that really detracts from the whole argument Waugh is trying to make. Nor do I think she comes off looking like the kind of saint we would expect—a criticism Waugh would have understood. For Waugh, part of sainthood was about finding and living your vocation—Helena’s vocation was to find the cross. Waugh believed his own was to be a writer. Both served God in their own way through those vocations. Does it matter whether Helena found the True Cross? To some it may have added to their faith. Waugh himself actually comes off sounding uncertain. At the end of the preface he says, “The story is just something to be read; in fact, a legend.” But at the end of the novel itself, he states, “Above all the babble of her age and ours, she makes one blunt assertion. And there alone is hope.” Does the hope Waugh refers to lie in that she found the cross, or that there is hope itself? I guess it’s up to the reader to decide.

For readers who want a different take on Helena that again ties her to British myth, they might also enjoy Diana Paxson’s Priestess of Avalon, part of the Marion Zimmer Bradley Avalon series, which takes a less Catholic view of Helena, as the title suggests.

Tyler Tichelaar, Ph.D. is the author of King Arthur’s Children: A Study in Fiction and Tradition, The Gothic Wanderer: From Transgression to Redemption, and the upcoming novel Arthur’s Legacy, The Children of Arthur: Book One. You can visit Tyler at www.ChildrenofArthur.com and www.GothicWanderer.com